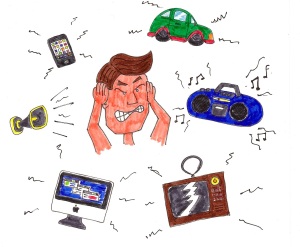 We are surrounded by voices clamouring for our attention aren’t we? As the world becomes smaller and fuller, the noise levels seem to grow. Young people don’t walk down the street with headphones on anymore, just mobile devices belching music out into the world. Reversing vehicles beep warnings inside and out, shop tannoy systems pump out subliminal advertising in-between songs. The gift of itunes, spotify and wifi means we can push sound around our houses more easily and cheaply than ever before. And we just get used to it. It becomes the norm.

I have a balance condition which is related to some shenanigans in my ears. Recently this has developed into a constant rushing sound in my left ear. At least I assume it’s constant because the sound is so low and gentle that I only really hear it when it’s quiet. Which is usually first thing in the morning and last thing at night. The rest of the time it’s drowned by the sounds around me. I take comfort in the sounds around me because they stop me hearing this annoyance. But sometimes its hard to tell whether the rushing sound is even there at all, sometimes I have to strain to hear it, or wait for a quiet time to be sure it’s still there at all.

Just as I sometimes crave noise in this way, I also crave noise in a wider sense to avoid being alone with myself and with God. I am scared that in the silence I will find judgement and guilt, rather than life. But as my friend Alex recently discovered, there is something in silence. In silence we find a God who wants not to judge us but to be with us and to let us be. To reveal to us in the solitude what we are usually too busy to understand. So we step out of the race to rest, but also to gain momentum.

In the old testament Elijah has a grudge match against the prophets of a god called baal. A challenge to see whose god can set the altar alight. It’s not pretty. Elijah and his God wipe the floor with baal. It’s a massacre. Elijah even has time for some casual mocking. If you don’t believe me check out this historical record. Elijah saw God send fire down from the sky and totally nuke the offering and yet the very next verses find Elijah running, cowering and indulging in a bout of self pity that would shame even me. Why is Elijah so down? Does he feel that it has all been in vain? Is he just exhausted from the effort? Is he depressed? Or is he just an irrational human with real flaws?

Whatever the reason for his slump in spirit, God leads Elijah to the mountain to speak with him. As Elijah waits on the mountainside three powerful moves of nature, not the kind you have after a curry, strike at the mountain – a strong wind, an earthquake and a fire. But God isn’t in any of these things – not even the fire. Which is strange. God has just revealed himself to Elijah through a barnstorming fire based victory yet when He comes to talk with Elijah it is not through fire. It’s as though God is refusing to be pinned down and boxed into human understanding, as thought he is refusing to be defined by one lone event. As Elijah’s brain is cranking up the noise in reflective contemplation of these very matters, his ears pick up a new sound. He can barely hear it, his noisy mind stops and there it is again, a whisper gently carried on the breeze, and here is God ready to converse. God in the destructive, raw power of fire, and the gentle whispered voice.

And one of the first things this voice says? Go back the way you came. Back into the world of distraction, of noise, of fear and depression. Back into the busy world that doesn’t listen, that laughs at the miraculous, the world that ignores you, that wears you down and threatens to break you, that demands from you, that steals your time and your joy, the world that will attempt to kill God, that will spit on His followers, that will write you off as crazy. Go into that world revitalised through silent time with your creator, go into that world and rebuild my garden.

We need the silence, but it was never meant to be a place to stay.

2 thoughts on “Living with distraction”