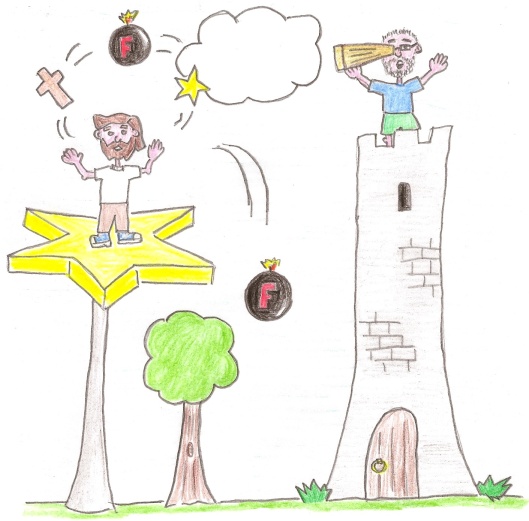 Ever play guess who’s a celebrity Christian? It’s a stupid fantasy game which basically involves latching onto to the smallest morsels of semi Christian chatter that come from someone well known’s lips and then wondering if they might be a Christian. For example, I might hear something which sounds vaguely biblical in a new popular song and wonder if the writer knows Jesus. It’s silly, but then us Christians do like to latch on to things.

Harry Potter’s evil! David Cameron goes to church! Megan Fox has a tattoo of the Pope! But far worse than all this speculative latchation (copyright) is when somebody famous actually reveals that they are a Christian. Now we have a foundation for our latching; now we can examine everything they say and do to make sure that they are a better Christian than us; now we can hold them up as an example to everyone who thinks Christians aren’t cool! POW! Take that heathens! Now we can judge them more harshly than we judge ourselves, and expect them to live a life second only to Jesus in terms of purity.

I’d like to claim that I am immune to this kind of thinking. That I am very realistic about the huge pressures of stardom and what strain that might put on your faith. I’d like to claim that, but it wouldn’t make a very good blog would it? No, I’m afraid I too share this weakness and when I found out that Zachary Levi, the actor from Chuck, was a ‘committed Christian’ I was interested to find out more. A quick online search revealed that Mr Levi appeared to be the real deal. But then, disaster: an interview where I’m afraid to report that the (look away kids) f-bomb was dropped. My illusions were shattered. How could this impostor claim to be a Christian yet send totally mixed messages in a very public way? “Shame on you Levi”, I thought. “I’d put you on a pedestal briefly but the height of your platform was quickly eclipsed by my ivory tower. How you are dwarfed by my judgemental wrath!” And then the Xbox cheated on Fifa and I swore. Loudly. And my ivory tower crumbled quickly and devastatingly.

A classic case of looking at the plank in my own eye before judging others. I may be a tad disappointed when a Christian with such a platform slips up, but who am I to judge? And how does God feel every time I fail to live up to the standards I so stringently apply to others – especially those in the limelight. Thank heavens I have no fame to speak of so I can sweep my frequent and horrible gaffs under the rug. Zachary, should you ever stumble upon this (not likely, but my back must be covered): I’m sorry man and I hope you never get the chance to examine my life the way I did yours. It’s bad enough to know that God sees it all.

Let’s dismantle the pedestals we have constructed for famous Christians and no longer let them hide our own failings, but let’s also refuse to build ivory towers of judgement where we blast those brave enough to wear their hearts and lives on their sleeves for all to see, good and bad.