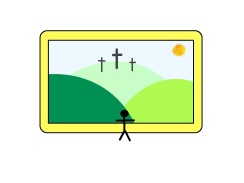 I’ve told you about my nephew before. I described him as ‘terrifying’ which he is. But not without reason. You see this little trooper has gone through more in four years than I have in 30. Ben has a skin condition. I don’t quite understand it and neither do the doctors. He’s been in hospital a number of times, had treatment for allergic reactions, and had his beautiful skin reduced to an itchy mess of scabs and sores. No wonder he can be terrifying. I think if I’d had half of that I would be insufferable,  totally depressed and asking God some serious ‘Why me?’ style questions.

Today was his first day at school and when I saw him this morning he was so excited, even the mundane act of putting his school uniform on greatly pleased him. Of course, before putting on his uniform he had to have various creams applied to his body and sit still and allow them to dry, but this did nothing to dampen his enthusiasm. Us adults are a little more worried than Ben – sometimes seeing the bigger picture does this. You see, we know how easily frustrated he gets, and how when this happens he itches and paws at his skin making it more sore. We worry about him being at school, and we wonder whether he will even be cured of this ailment and what it might mean for his future.

Sometimes seeing the bigger picture causes us to lose track of the moment. Ben’s in the moment, he’s off to school for the first time and he’s not going to let this minor annoyance stop him. Would we be the same? Or would fear of the future freeze us in the present? How far down the line will Ben pick up on the fact that the adults he knows are thinking this way?

I’m not saying we shouldn’t consider the big picture, indeed it is good to do so. But when worry and fear are involved sometimes the big picture we see can paralyse us. And the thing is we may think we are looking at the big picture, but how big is it really? How many possibilities can our tiny minds actually consider? Why are they often drawn to the more negative of the possible outcomes? God is the only one who sees the whole picture, our ‘big pictures’ as huge as they are to us, are microscopic to Him. Yet He still gets involved.

Jesus famously told us not to worry about tomorrow as today has enough issues of its own, the implication being that if we worry about what may happen we will miss what is actually happening right now.

Being aware of our ‘big pictures’ is one thing, being consumed by them another thing entirely. Jesus marched resolutely to his execution. He knew it was coming, how would you deal with that? One day at a time friend, one day at a time.

For further thoughts on The Big Picture click here.