I do not measure up to the world’s image of a man. I don’t like rugby. I bake cakes. I am pitiful at DIY and now, after recent events, I am forced to admit that I can’t even repair a punctured bike tyre. Now I have been really unlucky with this tyre, it has been deflated a number of times. Also deflated is my ego at each failed attempt to repair it. Usually after working up an anger to rival 5 aside fury I give in and buy a new inner tube. So when I came to load my bike into the car for a weekend away at Center Parcs and found the tyre, yet again, flat, you would have thought I’d have rushed to the shop and got a replacement tube. After all that would have been the sensible thing to do wouldn’t it? But nooooooooooo! Not me. You see I take each punctured tube not as bad luck or misfortune, but a direct attack on my total ineptitude at practical masculine, and somewhat simple, tasks. 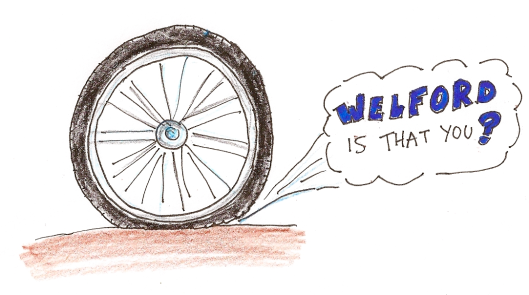 The tiny hole that allows that air to bled from my steed is not just creating another job for me to attend to, but it is mocking me mercilessly. Can you hear it? Listen close to the raspy little sucker – ‘Welford is that you? Can’t even fix me can you? You pathetic excuse for a man! I have reduced you to a wasted hour of failed attempts, fits of fury, and more swear words than you have used in the last year! Mwhahahaha!’

After my third attempt to apply the stupid patches I picked up the tube of rubber cement to see if I was missing some vital instruction. ‘IRRITANT!’ the side of the tube boldly proclaimed. ‘You’re not kidding’ I thought, as I launched it across the garage.

In that moment I was a mix of anger and despair. Anger because despite following the instructions it still didn’t work, and despair at being reminded that here was another simple task I could not perform. While my friend, God bless him, who has just moved in down the road is building shelves from old drawers, painting the house from top to bottom, working shifts and looking after two kids under three, I was struggling to patch a hole the size of a pinprick. And if I couldn’t do that, in what other arenas would I fail to live up to my designation as a man? I have already failed to provide my wife with a child, she is the main breadwinner, and my lack of DIY nous means I am relegated to performing even simpler chores such as hoovering, ironing and emptying the dishwasher.

And as I dismantle my person so effectively, there, sat on the work bench is Jesus. He’s not said anything, he doesn’t need to. He’s just waiting, waiting for me to turn and face Him, to receive His comfort, to let Him meet my needs, to let Him reaffirm me, not in the image I have taken on, not in the mantle of the world, but in the way He created me, in His image, in the robes of the King.

For Christian men looking for a bit of a push, or something to get your teeth into check out the code at codelife.org