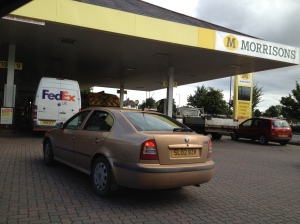 Our local supermarket is running a fuel promotion. Spend more than £40 in the store and you get a six pence per litre discount on their fuel. Fantastic stuff except for one small detail – the queues and the hassles at the filling station. I joined the queue this morning with a near empty tank, eager to claim my discount. At one point vehicles were queuing into the road and it began to get silly.

One old boy saw an opportunity to get to a pump, and he cut across the queue pushing in front of another customer. The car window came down and there was an exchange. I guess that the age of the pusher-in saved him from any more than a verbal confrontation.

The same elderly man was at the front of the queue to pay by the time I got into the filling station shop. He was having another argument insisting that he had only put £15 worth of fuel into his vehicle, not the £19.80 he was being asked to pay. Patiently the assistant pointed out to the customer that he had purchased a little over fifteen litres of fuel, not £15 worth. The argument continued as the customer insisted that even if it was fifteen litres he had stopped the pump dead on the fifteen, not gone over. Eventually he paid up and left.

I noticed that no one else engaged with the filling station assistant. Nobody said good morning. No one smiled. They all just wanted to pay and go. When I reached the desk I mentioned that the old fellow had already been involved in a dispute on the forecourt. The assistant was so pleased that someone had spoken to him that he began to regale me with tales of other forecourt mishaps. Meanwhile the queue was building up behind me, and none of those waiting to pay were smiling.

It occurred to me that in attempting to live out our Christian faith daily we need to be careful about our interactions with others. How do we react to queue jumpers? How do we deal with human beings who try our patience? Do we smile at filling station assistants and the people we encounter during our daily routines? Do we find time to be pleasant to others? Do we make time to listen? The only way I can work out how I should behave is to consider how Jesus would react. I need to remember how much Jesus loves the elderly queue jumper and the filling station assistant, and those in the queue. I need to consider that while Jesus came across more than His fair share of idiots, He never wavered in His compassion for humanity. I need more of Jesus in me.

Therefore, as God’s chosen people, holy and dearly loved, clothe yourselves with compassion, kindness, humility, gentleness and patience. Bear with each other and forgive one another if any of you has a grievance against someone. Forgive as the Lord forgave you. And over all these virtues put on love, which binds them all together in perfect unity.

Let the peace of Christ rule in your hearts, since as members of one body you were called to peace. And be thankful. Let the message of Christ dwell among you richly as you teach and admonish one another with all wisdom through psalms, hymns, and songs from the Spirit, singing to God with gratitude in your hearts.And whatever you do, whether in word or deed, do it all in the name of the Lord Jesus, giving thanks to God the Father through him. (Colossians 3:12-17 NIV)

5 thoughts on “The Cost of Fuel”