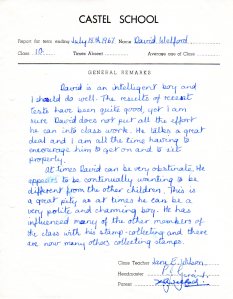 It wasn’t too long after I started school when I realised that the teachers hated me. This was based on more than just the impression they gave when dealing with me in class. It was backed up in the handwritten reports they sent home to my parents every year, and in the comments they made to my parents. As I grew older I began to dread school report time, and I lived in fear of parents’ evening. My single page report at the end of July 1967 praised me initially, then criticised me a lot, but ended with these words:

He has influenced many of the other members of the class with his stamp collecting and there are now many others collecting stamps.

I was ten years old at the time. It was no more my intention to be a difficult pupil, than it was to influence the class with my passion for stamp collecting. But somehow I managed both. That passion for collecting stamps came from my father. I still have my stamp collection, and all the First Day Covers he arranged for me. I still have my 1966 Football World Club stamp overprinted with the words ‘England Winners.’ There won’t be another one of those any time soon!

The importance of Passion 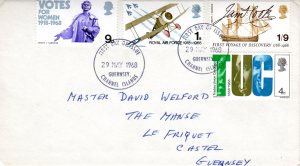 Passion is contagious. Other children wanted to collect stamps because I couldn’t stop talking about stamp collecting. I brought stamps from different countries to school to show to the other children, and I started a stamp-collecting club. As we swapped stamps we learned about many things. There was the value of each stamp – the cost of acquiring different stamps. I really wanted a Victorian ‘Penny Black’ but these stamps were rare and very valuable. Our knowledge of geography developed as we considered the countries where each stamp originated. Some of the stamps featured great men and women of history, while others showed wildlife or plants. There was so much to learn from such an unexpected source. As a ten-year old boy I had no idea that my stamp collecting would create such a legacy. But I don’t collect stamps anymore, and my collection is in a drawer under my bed.

When I became a Christian I remember being overwhelmed by the knowledge of God, of what He had done for me, and the change that one little decision to believe in Him meant. But life soon got in the way and my relationship with God got put to one side, just like my passion for stamp collecting. From time-to-time the passion returned, until one day it wouldn’t go away to the extent that I find myself waking earlier than I should and sitting typing words like these, which I believe God wants me to share.

At the point of surrender when we acknowledge God and allow Him to begin a process of transformation with our lives and in our lives, He also wants to work through our lives. God has given us a legacy, but He expects one from us in return. My personal understanding is that in surrendering my human life before and to my Maker means that life becomes more about God and less about me. I have received a legacy, and I must leave one. I must allow God to use my life to make a difference to the lives of others, such as the people around me every day, and those I meet in apparently casual encounters. I must continue to be passionate and my passion for God must be contagious.

There is one more very important thing about legacies. It is not just about looking forward to see what legacy might be left, but it is also about looking back to consider what has been achieved to date. When I look at my school report there are bits that I am ashamed of, but they are balanced by the sentences that encourage me. I am glad to know that I influenced others as a ten-year old boy passionate about postage stamps. A small legacy perhaps, but it was important enough for my teacher to acknowledge in my school report. Sometimes we need to stop beating ourselves up and look back. We probably do not realise the impact we have made on others, or on their lives. It is important to be encouraged and to remember that we do not travel alone. Jesus said:

If you love me, keep my commands. And I will ask the Father, and he will give you another advocate to help you and be with you forever – the Spirit of truth. The world cannot accept him, because it neither sees him nor knows him. But you know him, for he lives with you and will be in you. I will not leave you as orphans; I will come to you. (John 14:15-18 NIV)

2 thoughts on “Leaving a Legacy”