By the time you have had four children a certain over-confidence creeps in. A ‘piece of cake’ attitude that says you know all there is to know about child rearing. So when number five arrived in October 1999 Marilyn and I were not particularly perturbed. Perhaps the fact that he arrived two and a half weeks early should have served as a warning?

John was born at home, as were two of our other children. We took this route after Michael came close to being born in the car. On that occasion labour commenced at 06:00 hours, we left home at 06:25, arrived at Hereford Hospital at 06:45 and were introduced to our new son at 06:58! A few minutes later I was eating hot buttered toast courtesy of the next midwife to come on duty, who happened to be a friend of ours.

But back to John. Everything seemed pretty normal until the night he was hospitalised with a twisted bowel. I will never forget the pain in our eighteen month-old son’s eyes as Marilyn and I held him at three in the morning while a doctor and nurse repeatedly tried to find a vein in a chubby little hand so that they could get a saline drip attached. The two people John loved and trusted most in the world were holding him down so that other people could hurt him! Fast forward a few hours and after the problem cleared without any need for surgical intervention John was discharged. But something had changed in his little mind. For the next two and a half years he chose not to speak, and became very difficult to feed. Rice Krispies, milk, yoghurt, bananas and chocolate were about all we could get him to eat.

With the help of a dietician and the special needs provision of our local education authority things began to change. If you saw John now you would see a normal healthy teenager, a little on the small side perhaps, but then we still have some issues with food! He is doing well at school, and represents his school at rugby, just like his brother Michael did back in the nineties. What you would not know is that through all the time that John did not speak, he had an unusual ability to overcome sadness in my life. I used to call him my medicine man because whenever John was around I just could not be unhappy. Whatever was troubling me at any given time just seemed to vanish when John walked into the room. 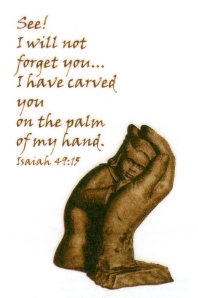 I believe that God hates to see his children unhappy, or overcome with sadness to the point of depression and beyond. He sent a little medicine man into our family at a time when I really needed it. However, when I think back it wasn’t a medicine man I needed, but a closer walk with God. I needed a walk that would lead me to share everything with God, a walk that would give Him first place in my life, a walk that would recognise God walking with me side-by-side bringing His joy and His light into my life. I’m still pursuing that walk. Stuff gets in the way. But I know that my Father in Heaven only wants good for me, and that some of the things that happen are perhaps His medicine to bring me to the place where He has my full attention, and I get to understand that I am truly His child.

“Can a mother forget the baby at her breast  and have no compassion on the child she has borne? Though she may forget, I will not forget you! See, I have engraved you on the palms of my hands.” Isaiah 49:15-16