Several years ago I trained for and took an advanced driving test. The examiner made no notes during my ninety-minute test, but at the end of the test reviewed everything I had done from the moment he got into the car with me. Most of what he said was encouraging, and I am pleased to say that I passed, but the process of passing did not automatically make me a better driver. I need to constantly apply the things I have learned and the experience I have gained throughout my time as a driver, while aiming for further improvement and remembering that there is always more to learn.

Sometimes it is good to look back and consider our faith journey. Rachel Quigley did this in her post ‘Unwrapping 43’ in which she reviewed her life decade by decade, looking at the life lessons of each. Having read Rachel’s post several times I felt challenged to do the same, and having shared my decades with Rachel, she encouraged me to share them publically.

I share the thought of rocks with Rachel for my first decade. More specifically Grandes Rocques, which is the rocky beach where I played with my friends in the island of Guernsey. We spent more time on the rocks and on the old Napoleonic/German fortifications than we did on the sand. This was a time of great freedom and blessings when the foundation of my life as a follower of Jesus was laid. Not in Guernsey granite, but through my Christian home and those who taught me in church. I have Heather Le Page (then Heather Falla) to thank in particular.

My second decade was one of storms. We moved from Guernsey to a new town on the mainland when I was eleven, leaving my beautiful island and friends behind. Troubled teenage years followed. I wasn’t happy. I joined the Merchant Navy at sixteen where I soon experienced real storms at sea, as well as in my life. But Jesus was already walking on the water towards me through my storms. He led me to a church in South Shields while I was studying at the Marine College there. I was baptised in water just before my eighteenth birthday, but baptism was not followed by calm seas. Dark clouds gathered and I soon slipped backwards. But my encounters with God during the storms saw layers of brick slowly added to the foundation of rock laid in my life during the first decade.

The twenties were a decade of responsibility. I was quickly promoted to third officer, then to second officer at sea. Marriage and parenthood followed. Then at the age of twenty-eight I returned to education and studied at University for three years while also working part-time and doing my best to support my wife Marilyn and our first two children. This was also a time of returning to God, as a three-year old Nick after watching ‘Songs of Praise’ on television constantly nagged Marilyn and I to take him to church. At University I encountered house groups for the first time in my life. Sharing in such a close way added further layers of brick, and window and door frames too as I began to see God’s hand on my life, and on my family.

Struggles characterised the decade from thirty to forty. There were career changes including two redundancies and I eventually became self-employed. Two more children were added to our family. I believe that struggles create challenges and that both are necessary to prompt and promote growth. I guess that the roof timbers were added during my thirties, in readiness for tiling.

Rachel saw grace in her fifth decade (40-50) and so do I. This is a decade in which I recognize being touched by the grace of God in many ways. Our fifth child, my medicine man, was born. I underwent major surgery at forty-three, was baptised in the Holy Spirit at forty-five, and then received miraculous healing from the ailment that had resulted in the earlier surgery a few months later.  Each measure of grace could be a tile on the roof. So many tiles that I cannot count them as I feel myself moving and growing in God.

And so we come to the sixth decade of my life, which at fifty-six years of age has a few more years to run. This has been a decade of change. Unexpectedly there have been more struggles with unforeseen challenges in life, family, work and church. Five years ago we moved church as a family, after twenty-nine years in our previous church. Marilyn and I are now grandparents. Three of our sons are married, and we have had the sad task of helping one through troubles in his marriage. Retirement should be close but isn’t, with workload heavy, and finances difficult due to constant late payment (I am still self-employed).  Despite changes and challenges I find myself still confident in God. I am still growing in Him and I am most definitely still blessed. I continue to be overwhelmed by His love for me. The house may be built, but there is a lot of work to do fitting it out. Walls need plastering, floors fitting. There are doors and windows, plumbing, electrics, etc. to install. God has a lot of work to do on me yet.

Rachel pictures a nest holding it all together, but I see a boat, perhaps a lifeboat. Life is an often stormy sea, but I am crossing that sea with Jesus in the boat. As in the New Testament there are definitely times when I look and Jesus is asleep in the middle of the storm! How can He sleep through the storm? I take great comfort in knowing that He initiated the journey in the boat. My problem is that sometimes I forget that, and that He is in the boat with me.

Following the challenge in Rachel’s blog of remembering the decades I have gathered items together:

These items are now sitting on my office windowsill as a permanent reminder of God’s hand on my life through the decades. Can I challenge you to read Rachel’s blog, and then to sit down with God one morning and review your own decades? 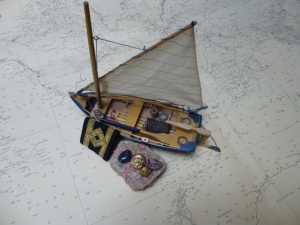