A family tradition has developed in response to the 250-mile journey we make north several times a year to visit our eldest son and his family. The tradition involves a stop at a certain service area where we know we can purchase Costa coffee and Krispy Kreme doughnuts. Out of the four of us who usually make the journey only three of us are fans of Costa and Krispy Kreme. John, our youngest son, remains in the dark – an unconverted heathen who would rather munch chocolate than doughnuts. 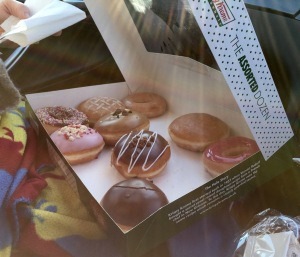 Until recently my daughter and I have chosen three different flavours of doughnut. Back in the car my wife has carefully cut each doughnut into three pieces so the three of us can taste each doughnut. A while ago we began to share our service area experience via social media. This resulted in interest from the unconverted. It seems that other people are attracted to Krispy Kreme doughnuts, based on our testimony alone. On the way north for New Year 2014 we purchased a box of twelve assorted doughnuts. We ate three and shared the surviving nine with Nick, Anna and our grandson when we arrived. Now a friend at home has submitted a request via Facebook that when we return we bring Krispy Kreme doughnuts for her to try. Is she crazy? Aren’t doughnuts supposed to be a bad choice nutritionally? She doesn’t seem to care. She has seen the obvious pleasure that Krispy Kremes bring to the Welford family and she is eager for us to share our family tradition.

So what about church? Is church a good tradition worth sharing? Is there anything exciting worth sharing, or is the problem that church is just too traditional and the world as a whole has moved on beyond those traditions? There has been some recent blog activity concerning people being done with church. This has resulted in discussions concerning the right and wrong way to do church, the need for new expressions of church, etc. Is there something wrong with the tradition?

The folk at Krispy Kreme have been following the same traditional recipe since 1937. If they changed the recipe their customers would walk away in disgust. Instead they have focused on new fillings and toppings. And perhaps that’s the problem with church. What we do now shares little with the model of the early church. This was the church that was responsible for the gospel message spreading like wildfire across towns and cities, countries and regions. So it doesn’t matter how good or bad we might consider our church to be. If our church isn’t having the same effect as the early church then perhaps it isn’t church at all? And regardless of the corporate responsibility if we claim to be followers of Jesus then surely we are the church and we should be spreading the good news? All our Facebook friends know that we love Krispy Kreme doughnuts. I wonder if they realise that we also love Jesus? And I wonder if they realise why we love Jesus?

But the believers who were scattered preached the Good News about Jesus wherever they went. Philip, for example, went to the city of Samaria and told the people there about the Messiah. Crowds listened intently to Philip because they were eager to hear his message and see the miraculous signs he did. Many evil spirits were cast out, screaming as they left their victims. And many who had been paralyzed or lame were healed. So there was great joy in that city. (Acts 8:4-8 NLT)

8 thoughts on “A Good Tradition”