I spent a few days attending meetings in London in January. One meeting took place on the eighth floor of a building next door to a new and somewhat controversial structure known locally as the ‘Walkie-Talkie.’ The Walkie Talkie has a rather interesting convex shape. The architects must have been pleased to watch the building grow, but there was one important factor they had not taken into account. This was the possibility that when glazed the building had the potential to act as a giant lens and focus the rays of the sun rather dangerously in a certain direction. The first indications that there were problems were a fire in a nearby shop, and the melting of plastic parts on a Jaguar car parked in the wrong place at the wrong time on the wrong day.

Another new building close to the Walkie Talkie has been nicknamed the ‘Cheesegrater.’ The pavement (sidewalk) around the Cheesegrater has been cordoned off because three steel bolts each the size of a human arm have decided to part company with the rest of the structure since November 2014. I am not sure if there have been any problems with the ‘Gherkin’ or the ‘Shard,’ both of which are equally new and already famous landmarks in London, but what did surprise me was the discovery that the Walkie Talkie is the third building to stand on the site in the last fifty years.

The current St Paul’s Cathedral is a short distance from the Walkie Talkie. Designed by Sir Christopher Wren, the Cathedral is the fourth to stand on what is said to be the highest point in the City of London. The foundations for the first cathedral were laid in 604. Work on the current cathedral commenced in 1675. 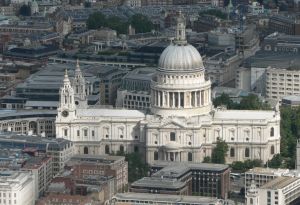 So it would seem that cathedrals last longer than office buildings in the City of London. This got me thinking about church buildings in general and why we get so obsessed with them, when the body of Christ is not meant to be a building but a group of individuals, each one of whom is considered by God to be a temple in which His Holy Spirit may reside. Building a temple takes time, but I believe that God builds in His own time, carefully constructing each individual temple, because each temple is uniquely precious to Him and will only be built once. Sadly, building problems do occur when working with human materials. But the Architect has patience beyond our understanding because He knows how each completed temple will look. That could explain why He chose to fashion each one in the first place.

Don’t you realise that your body is the temple of the Holy Spirit, who lives in you and was given to you by God? You do not belong to yourself, for God bought you with a high price. So you must honour God with your body. (1 Corinthians 6:19-20 NLT)

For he chose us in him before the creation of the world to be holy and blameless in his sight. In love he predestined us for adoption to sonship through Jesus Christ, in accordance with his pleasure and will. (Ephesians 1:4-5 NIV).

(Image of St Paul’s from Wikipedia.)