It has been a busy few weeks with little time spent at home due to work commitments, and even less time for blogging. I am currently in Sarajevo where war damage is still evident on many buildings. Sarajevo was besieged for an incredible 1,425 days during the war that lasted from 1992-1995. My taxi driver pointed out some of the damage during the journey from the airport, but told me that everyone is at peace now regardless of ethnicity or religion. 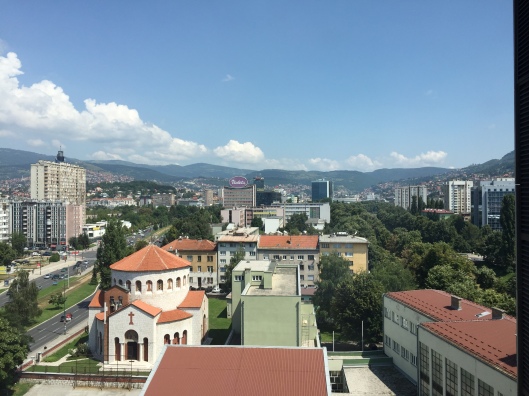 Sarajevo – the view from my hotel room

Peace also seems to reign in Northern Ireland where Marilyn and I spent four days last week. We met up with old friends who had travelled from the US to bring their parents’ ashes home to a place called Newtownards for interment. The family emigrated in the 70s but when their parents died within a few weeks of each other earlier this year the sons, Richard and Simon, decided to bring their mother home, and bury her and their father next to her mother’s grave.

Now an interment requires a minister and our friends located a certain Rev Jim Campbell in Newtownards. Richard made contact with Rev Campbell by telephone and email, and was able to brief Rev Campbell about his parents to the extent that during the interment it seemed as if Rev Campbell had personally known Peter and Mary Griffiths. He read from Ecclesiastes 3 (there is a time for everything) and from Psalm 121 (the God who never slumbers) and talked about the deep desire of the Irish to come home. Rev Campbell used this as an illustration of the need for all humankind to one day come home to their Heavenly Father.

While Mary could not have been certain that her human remains would end up buried in Irish soil she and Peter had complete confidence in their heavenly home coming. How? Because they both enjoyed a relationship with the living God who has promised that all who believe in Him and surrender their lives into His hands will have a home coming beyond their wildest imagination. We all have to die. The funeral ceremony is of little relevance if we have not made the decision to submit our lives to God.

Martha said to Jesus, “Lord, if only you had been here, my brother would not have died. But even now I know that God will give you whatever you ask.”

Jesus told her, “Your brother will rise again.”

“Yes,” Martha said, “he will rise when everyone else rises, at the last day.”

7 thoughts on “Finding Our Way Home”