Losing two family members in the space of three months this year served as a reminder of just how much family matters. It seems strange looking back that the last time I saw my sister Linda was on 18 March 2020 at our mother’s cremation and thanksgiving service. The very next week the UK government introduced a Covid-19 lockdown with travel restrictions across the country that prevented our family from being able to meet up. This left my father alone in Devon, and Linda pretty much alone in her maisonette in Surrey. Alone that is until the night that the ambulance transported Linda back to the hospital where she nursed for thirty-six years. The hospital where Linda took her last breath on 26 May 2020. 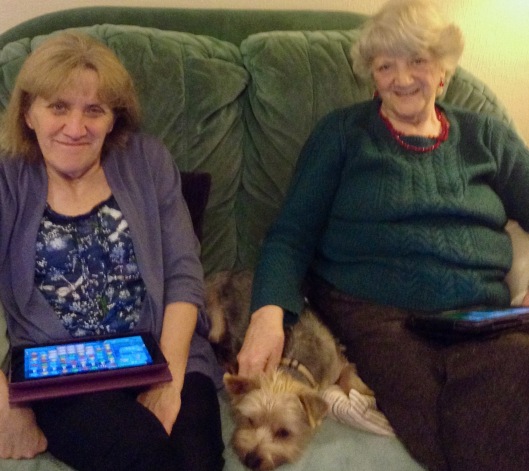 Linda and Mum with Sam the Yorkshire Terrier, who now resides with us

May already seems a long time ago. I’d like to say that life has moved on but these are strange times and we now seem to be stuck in a version of Groundhog Day in which we wake up and nothing appears to have changed. But things have changed and two members of our family are no longer with us, leaving the family with just our memories. Memories fade over time and this post is a short attempt at recording just a few of my memories of Linda.

Some early memories are based on photographs, particularly those taken during visits to our grandparents in Devon, although I do remember their home and the beach. Linda, of course, was born in Devon but in 1962 the family moved to Guernsey in the Channel Islands where I started school. Linda got to stay home with Mum until 1965. No nursery in those days.

Clutching Christmas presents in 1963 (I think). Photo taken in the lane where our grandparents lived in Devon

Having been the only child for three-and-a-half years I am told that I was somewhat peeved when competition arrived making me the big brother. Being big brother came with certain responsibilities, most of which meant that I got the blame for pretty much everything. This included Linda falling out of her highchair in the dining room. I was playing on the other side of the room and hadn’t realised that it was my duty to check that my parents had secured Linda into the highchair correctly.

I recall that we did play together at times, although I never took to Linda’s favourite doll who went by the name of Geraldine. For her part Linda never really wanted to play with my Airfix tanks and soldiers. We shared a bedroom for several years and I am not sure that Linda ever forgave me for having the privilege of sleeping in the top bunk.

We did get up to some joint mischief. One joint effort involved shaking money out of our TSB moneyboxes and hiding it in the bedroom so that we could buy tuck at school. Linda let the cat out of the bag the day she was off school due to illness and I insisted that I should still take tuck money to school. She thought otherwise and told Dad about our cash stash.

Then there were the attempts to defeat Mum’s security measures designed to keep the biscuit tin out of reach on the days that we arrived home from school and Mum was out. The back door key was under the door mat and the key to the kitchen door used to be hidden on top of the architrave. When the kitchen door key hiding place was changed we climbed through the serving hatch. Then one day we arrived home to find that the hatch handles had been tied together with string from the kitchen side. We found Mum’s dressmaking scissors and managed to cut the string by poking the scissors through the gap between the doors. For some reason we thought that we would be able to retie the string and avoid detection. Not a chance. And Mum being a canny Scot always knew how many biscuits were in the tin, including any broken pieces. 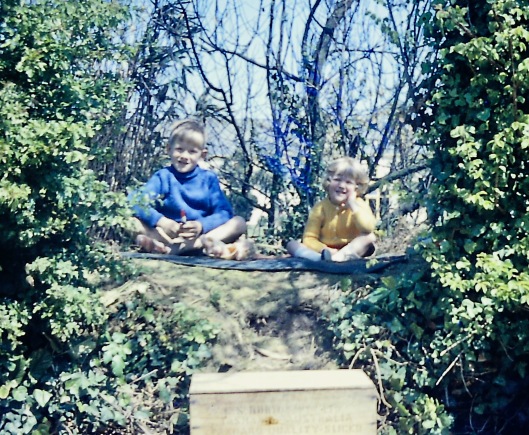 Me with Linda in our den in the garden in Guernsey

In time we moved back to England – or the mainland as we had come to call it. Having passed my eleven-plus I got to go to grammar school. Linda was not so lucky. When I left home in 1973 Linda suddenly found out what it was like to be the oldest child in the house and having to carry the can for things that were not always your fault. It was at this time that the family relocated to Surrey, where a couple of years later Mum started to notice a problem with Linda’s back. I wasn’t around too much in those days, but I did get leave while my ship was drydocked in the UK and was able to visit Linda in hospital. This was after her surgery and she was still smiling despite being encased in plaster from her hips to her neck!

Moving forwards to 2007 Linda accompanied us and our two youngest on a trip to Orlando where we spent one week visiting the Disney parks and a few days at Universal. Problems with her back did not seem to deter Linda from going on the rides.

Linda with nephew John and niece Beth at Disney in Orlando

One thing that I didn’t realise until after Linda died was that we both came to faith in Jesus Christ in the same place, albeit three years apart, me in 1969 and Linda in 1972. The place was a school near Lowestoft where annual summer camps were held in the grounds. I also have to thank this camp for introducing me to tea without sugar but that’s another story. I still remember the day when the twelve-year old me was suddenly and completely overwhelmed by the knowledge that the Creator of the Universe loved me. I guess it was the same for Linda. I do know that the experience changed both of our lives forever. Yes our faith took some growing into, and I certainly made loads of mistakes and drifted away from God on occasions for varying periods of time.

The message once again to all who worked with Linda, were nursed by Linda, or were friends of Linda is that Linda was the way she was because of her personal relationship with Jesus Christ. What an outstanding relationship that was. It changed the Linda I knew as a child to the Linda you all knew as an adult. I am blessed to know how many people Linda blessed in her life. Her life was a life well-lived for the glory of God, despite the pain she suffered. Linda never considered her back problems to be a disability and continued to help others as much as she could almost until the day that God unexpectedly called her home. I’m proud that she was my sister.