After two weeks in a repair yard and in drydock the Sheaf Royal was finally due to sail for New Orleans. The excitement of going to sea for the first time was only marginally greater than my excitement in our destination.  What I knew of the USA was gleaned through television and from the experience of a school friend who had lived in the USA on and off before finally emigrating in 1971. Now I was going to the New World!

It took fifteen days for the Sheaf Royal to reach the mouth of the Mississippi River and a further ten hours under pilotage before we anchored off New Orleans. During the voyage George (the other first trip cadet) and I were kept busy with many tasks, most of them manual and dirty. We didn’t care. Everything was new and we were keen to learn and become competent seafarers, even though we were just starting out. We found ourselves cleaning the holds, chipping (paint) and painting, greasing things that needed greasing, and so on. Cleaning the bilges was probably one of the worst jobs. One of the most challenging tasks we were given was to move 213 tins of paint (1,315 litres in total) from the fo’c’sle store to another store located off the greasers’ alleyway on the main deck of the accommodation, a distance of roughly 460 feet (140 metres). We used a wheelbarrow to move the paint aft, with the Sheaf Royal rolling up to 30 degrees from the upright throughout. 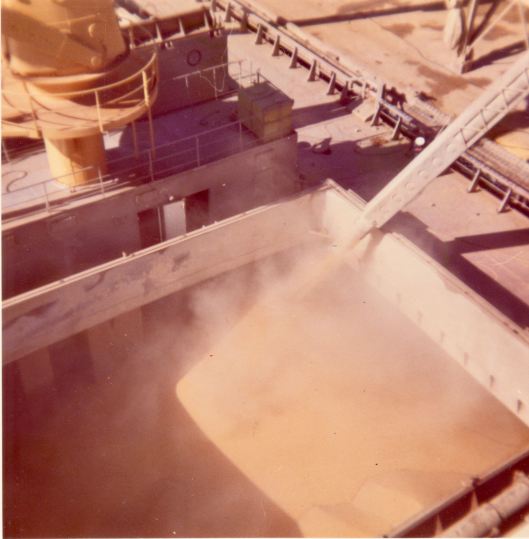 mv Sheaf Royal in Destrehan, Louisiana in November 1973. Grain pouring into one of the holds from the grain elevator

We went ashore in New Orleans and found ourselves overwhelmed by the culture. There was so much to take in, yet this was but the start of our journeying. In the next few months we would visit Rotterdam, Puerto Ordaz (Venezuela), Mobile and Beaumont in the USA, transit the Panama Canal, cross the Pacific Ocean, and spend almost a month in Nakhodka in the Soviet Far East before flying home from Japan.

I am reminded that my life as a follower of Jesus is like a voyage, and that I still haven’t reached the final port. I recall the joy and excitement when Jesus found me and I began the journey of following Him. It hasn’t always been easy. There have been many struggles and challenges, not unlike moving paint in a wheelbarrow along the deck of a ship that is rolling heavily. But God has never let me down. I still feel like a first trip cadet most of the time. But I know that at the end of the voyage I will travel home to be with Him. And that makes the struggles, the challenges, the pain, and everything else all worthwhile.

Then I saw a new heaven and a new earth, for the old heaven and the old earth had disappeared. And the sea was also gone. And I saw the holy city, the new Jerusalem, coming down from God out of heaven like a bride beautifully dressed for her husband.

I heard a loud shout from the throne, saying, “Look, God’s home is now among his people! He will live with them, and they will be his people. God himself will be with them. He will wipe every tear from their eyes, and there will be no more death or sorrow or crying or pain. All these things are gone forever.” (Revelation 21:1-4 NLT)

2 thoughts on “Leaving the Old World for the New”