Cadets were required to complete projects for college while at sea as well as studying maths, physics, navigation, etc. Fellow first trip cadet George and I were both keen to get stuck into our studies on the Sheaf Royal. Study took place mostly in the evenings, after we had done a days’ work. At sea (as opposed to in port) cadets were usually given Sundays off for study, but Sunday was also when inspection took place and cadets’ cabins needed to be spotless before the old man and his inspection party came round. Cleaning of cabins and bathrooms ate into that precious day off but had to be carried out to a good standard. Cadets’ cabins received a closer inspection than everywhere else. 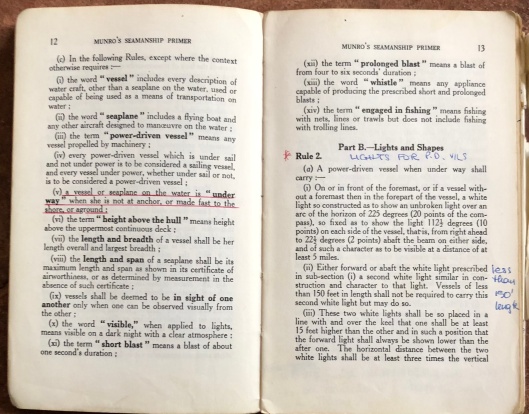 As well as college work we were required to start learning the collision rules (Regulations for Preventing Collision at Sea) off by heart, which would prove useful when we came to sit the oral part of our examinations three and a half years down the line. There were thirty-one of these plus an annex to learn in my day, half in the initial sea period and half in the intermediate sea period. The rules occupied thirty pages in my Munro’s Seamanship Primer, so there was quite a lot to learn and understand. The mate on the Sheaf Royal insisted that we learn one rule a week and attend the bridge at 16:30 each Sunday at sea to recite a rule to him verbatim. If we didn’t get it right, we were sent back to our cabins and told to return to the bridge when we had learned it properly. Rules were signed off by the mate in our record books when he was satisfied. I managed to learn ten of the rules on the Sheaf Royal.

There were other rules to learn too. One of the most obvious was not to sit on the ship’s rails. Only first trippers and seagulls sit on the rails. Then there were the rules that weren’t really rules but good advice. One of the best bits of advice was provided by the second mate who told me that the first thing to do after joining every ship as a cadet is to find a hiding place. A visible cadet is a target for more work. My hiding place on the Sheaf Royal was in one of the mast houses. 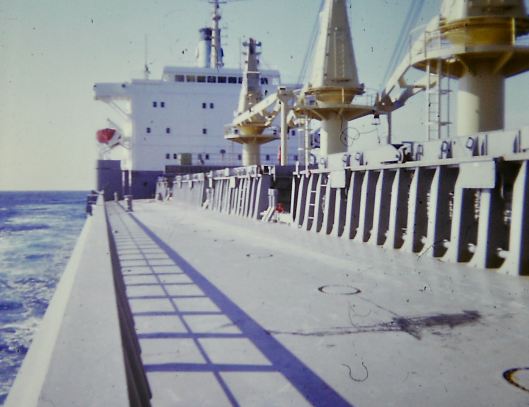 mv Sheaf Royal: Sitting on the rules is not allowed!

There are a lot of rules in the Bible. Enough to be seriously off-putting – unless you subscribe to the Pharisaic code. The pharisees of the New Testament were highly skilled at making and following rules. You wouldn’t catch a pharisee sitting on the rail of a fishing boat on Lake Galilee. Just as cadets got tested on the collision regulations so the pharisees used to try and test Jesus on the rules, rules they’d want all of us to follow if we lived in their world, or they in ours. Jesus introduced a new rule: love God, love others. Sounds good to me. And much easier to learn than the collision regs.

But when the Pharisees heard that he had silenced the Sadducees with his reply, they met together to question him again. One of them, an expert in religious law, tried to trap him with this question: “Teacher, which is the most important commandment in the law of Moses?”

Jesus replied, “‘You must love the Lord your God with all your heart, all your soul, and all your mind.’ This is the first and greatest commandment. A second is equally important: ‘Love your neighbour as yourself.’ The entire law and all the demands of the prophets are based on these two commandments.” (Matthew 22:34-40 NLT)

5 thoughts on “Learning the Rules”