At 06:00 on 4 January 1974 the Sheaf Royal was finally alongside in Puerto Ordaz after a 200-mile pilotage up the River Orinoco. Loading of our iron ore cargo commenced at 13:00 but stopped at 17:00 when the La Estancia berthed ahead of us. La Estancia had run aground further down the Orinoco, but now free of the mud needed to be loaded ahead of the Sheaf Royal.

Somehow, I got into conversation with a catering boy from La Estancia, who was my age. He had a few stories, including one about a ‘special’ sandwich he had made for the captain of La Estancia after the captain had dished out a rollicking to the catering boy. After that little revelation I was never able to eat the sandwiches on the bridge of any ship when on watch. I sort of wish I had not met the catering boy or allowed him into my cabin. For some reason he put his cigarette out in my gash bucket (bin) instead of using the ash tray. The only problem was that the cigarette wasn’t quite out as I was soon to discover.

I went ashore with several others, unaware of the drama developing in my cabin where the bin was beginning to smoulder. It was the second mate who smelt burning and then spotted wisps of smoke coming from under my cabin door. He went to the mate who had a master key. They grabbed a fire extinguisher and entered my cabin where flames were just beginning to emerge from the bin. The second mate extinguished the fire and removed the bin to the after deck where it was filled with water just to make sure that the fire was well and truly out. They opened my port to ventilate the cabin and that was it. Only it wasn’t. The mate was on the warpath, but his target was up the road. 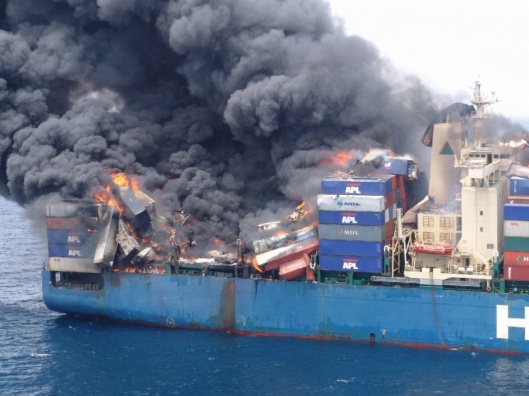 Fire on the Hyundai Fortune in March 2006

At some point in the evening I bumped into someone from the Sheaf Royal who tipped me off to my impending predicament. I could hardly believe it. I could not understand how my bin could have gone up in flames. But I did understand that it might be better if I got myself back to the ship and faced the music, rather than wait for the mate to come ashore and find me. So, I went back to the Sheaf Royal in a taxi. The fact that a sixteen-year-old boy could walk around a port 200 nautical miles up the Orinoco and go back to the ship alone is a reminder that Venezuela was a much safer country in the 1970s than it is now.

Back on the ship I found that the music I faced was considerably louder than I had expected. Claims of ignorance and it not being my cigarette fell on very deaf Scottish ears. I wasn’t too popular elsewhere either. Fire and ships do not go well together. I was a pariah for about three weeks. There was another and more immediate problem; once the fumes had mostly dissipated my open port provided an invitation to the local bug population. Me and bugs don’t go well together, particularly the ones that bite. And the smell of the burning bin lingered for a little longer than I would have expected.

While fire is always bad on a ship there is a kind of fire that while highly desirable seems to be largely absent from the church. The same fire that fell on 120 believers at Pentecost 2,000 years ago was promised for all who believe. In fact, it is hard to understand how the church today operates without that fire. Just how much isn’t happening in and through our churches because we are missing the fire of God’s Holy Spirit?

I baptise with water those who repent of their sins and turn to God. But someone is coming soon who is greater than I am – so much greater that I’m not worthy even to be his slave and carry his sandals. He will baptise you with the Holy Spirit and with fire. (John the Baptist – Matthew 3:11 NLT)

On the day of Pentecost all the believers were meeting together in one place. Suddenly, there was a sound from heaven like the roaring of a mighty windstorm, and it filled the house where they were sitting. Then, what looked like flames or tongues of fire appeared and settled on each of them. And everyone present was filled with the Holy Spirit and began speaking in other languages, as the Holy Spirit gave them this ability. (Acts 2:1-4 NLT)