Rust happens. Especially at sea. When I joined the Sheaf Royal, she was only a year old and there was very little rust in evidence. That didn’t mean there was no painting required, but it did mean no chipping of old paint and rust. I had to wait until I joined the Irish Wasa to become familiar with a chipping hammer. Over familiar I would say. I do prefer painting to chipping, but if the rust isn’t removed then the new paint doesn’t last long. 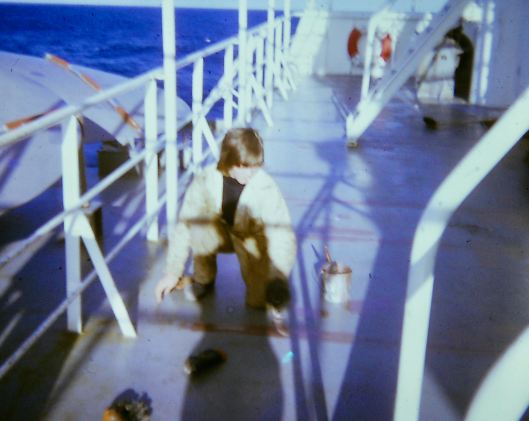 Me painting on the Sheaf Royal

The Bamburgh Castle was another of my company’s ships. The first time I saw the Bamburgh Castle was when she was alongside the Irish Wasa in the locks when both ships were sailing from Birkenhead in July 1974. Two rust buckets side-by-side! Both long gone, as have all the ships I sailed on to the best of my knowledge, and given that the last time I signed ship’s articles was in 1993. The rust eventually wins. The Irish Wasa was damaged by fire in February 1977 soon after being sold to new owners. She was scrapped a couple of months later.

The next time I saw the Bamburgh Castle she was being professionally painted while in drydock in South Shields. I was part way through a six-month block release at marine college at the time. My fellow cadets, who were employed by other companies, mocked the appearance of the Bamburgh Castle as we passed the drydock on the way to the college’s seamanship centre. Their comments didn’t improve when they saw that paint was being applied directly to a rusty hull. Cheapest way perhaps, and the paintwork looked good for a few days at least. Until the Bamburgh Castle sailed.

Then there was the Austin 1300 Countryman I purchased for £320 just before returning to South Shields for my second block release. This car was nine years old with 70,000 miles on the clock (this was high mileage in 1976) but looked immaculate. The reason the car looked immaculate was down to the skill of the man who sold it to me. He was a dab hand with fibreglass and spray paint as I was to discover a few weeks later in South Shields when the concealed rust began to resurface. Friends told me that I should have checked the car over with a magnet to check for fibreglass before handing over any cash. Oh, the wonderful science of hindsight.

There is a place that Jesus taught about where nothing rusts. I think the general gist was that it will be no good having the sort of hindsight that says, “I wished I believed in Jesus when I was alive and hadn’t been so focused on what I could get out of my then life on Earth.” Hindsight is always too late.